I haven’t written because I’ve been having a hard time finding the words to describe what happened after I wrote the post ‘The Rules This Time‘. It was something of a turning point, though maybe not in the way you’d expect. In a way, I think it has brought me to a higher level of understanding – and in my life, each ratchet up in understanding has always provided greater clarity into my own stupidity, and revealed just how much more there is to be revealed.

The more I learn, the less it seems I know.

For those of you following at home: I wrote the above post, then began following it. I did all of these things and was  feeling quite good about myself – losing weight, feeling greater energy. 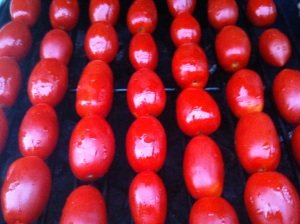 I consider myself fortunate to live in New Jersey.

New Jersey is the butt of many jokes, but it’s a misunderstood place, known mostly for Bruce Springsteen, the notorious show ‘The Jersey Shore’ which I have never seen, The show ‘The Sopranos’ which I have never seen, and the New Jersey Turnpike – the stretch of road so ugly that I can forgive people who’ve only seen that road as they drive through the state for thinking it is nothing but a hell hole.

It isn’t just these things, by any means.

New Jersey has some of the most fertile farmland in the United States. We don’t have big farms – we have small local farms. And we also have a very vibrant local organic farming community. When I go to my farmers market, there are no less than four farms within driving distance that raise organic vegetables and even meat and eggs selling their products there.

Two weeks ago, one of our local farmers, overflowing with the famous Jersey Tomatoes, had 25 pounds of locavore, organic plum tomatoes for $10.

We couldn’t pass it up.

While they have made their way into a lot of meals since then, I was amazed at what I produced when I threw some on the barbecue grill.

All I did was coat the outside in olive oil and place on a very hot grill.

Unless you leave them on for a very long time, they can’t burn – there’s just too much water in them. What happens is the outsides blacken and the insides reduce and carmalize – making them sweeter and more tasty. The blackened outsides add a complex smoky flavor.

This left me with the most awesome thick, and flavorful tomato puree I had ever had. I ate it like a soup with no additional seasonings.

If you only know tomatoes from what you’ve gotten in a grocery store, understand that those things you bought are nothing like the tomatoes I just described.

I am hoping that I will be so SICK of tomatoes by the end of the season that I can hold out until next summer when they are back in season before I buy one again.

Grocery store tomatoes are not worth it when you’ve had the real thing.