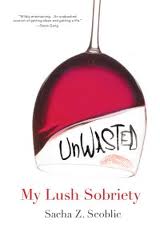 Note: I tend not to do book reviews because I feel I’m awful at them – and I’d only bother to do a review of a book that I enjoyed and found to be of value. If you agree that this attempt is a hatchet job like I do, I ask you to check out some real reviews, as this work deserves a look.

I was at my local B&N one lunchtime trying to decompress from a brain-sucking morning at work when I stumbled across this book. I read a few pages and was hooked. As the Kindle version was a few bucks cheaper and reading on the iPhone doesn’t bother me for certain books, I bought it for that and consumed this short book in a few days.

While the book is about giving up alcohol, and dealing with the pitfalls of sobriety in a world where booze ads are everywhere and there’s a bar on every corner, it is also about any decision to go against the flow. The awkwardness that others might have in dealing with us. The awkwardness we might have with ourselves as we leave the comfort of our routines.

And the simple fact that addiction is a bitch – the Uncontrollable that We Must Control.

It reminded me a lot of low carb dieting.

It bothers me that I always feel the outsider – planning for a day where my food choices might not be under my control. Trying to avoid the carbs that set me off. Asking sheepishly what the menu will be. Trying not to be the pain in the ass. Eating ahead of time. Turning down food offered by well-intentioned and sometimes very demanding folks who don’t quite understand.

Then there’s the explanations. The wrinkling of their brow. Their trying to understand – sincerely trying to frame the information so it makes sense to them.

And if they have made sense of it – it’s usually only insofar as to partition you as unlike them. You’re now the Outsider. When dessert is served, they ask: “Can you have this? It’s low in calorie.”

They don’t quite ‘get’ low carb – it’s not their fault – not their deal, really. It’s yours.

And the really awful part of all this? You really WANT what they’re serving. But you say no.

In some ways Sacha has it easier. An alcoholic embraces sobriety by a total abstention of drink. But people on a diet still need to eat – the slippery-slope of no-carb to low-carb to high-carb to eating an entire pint of Hagen Daz is much easier for those of us prone to this.

You might might read her book and say: this isn’t me. She’s a druggie and an alcoholic. She did Ecstasy!

Is your Ecstasy a box of Oreos and a quart of milk?

I give her a lot of credit for writing such an honest and authentic memoir. I didn’t feel sorry for her. It’s obvious she doesn’t want our pity.

She makes a very good point about ‘hitting bottom’. It’s not necessarily the same for all of us. It doesn’t fit a stereotype.

This point can apply to alcoholism, obesity, or a dozen other things in our lives we should control – that we tell ourselves: “Tomorrow I’ll do it.”

There is another strong similarity between alcoholism and obesity: you are never ‘cured’ of either.

No matter how thin you get, you are only a few months away from gaining it all back.

If you’re here because you’re fat and want to be thin, or trying to stay thin, you should check out this book.

Even if you’ve never had a drink in your life, you’ll relate.

One thought on “Book Review: Unwasted by Sacha Scoblic”