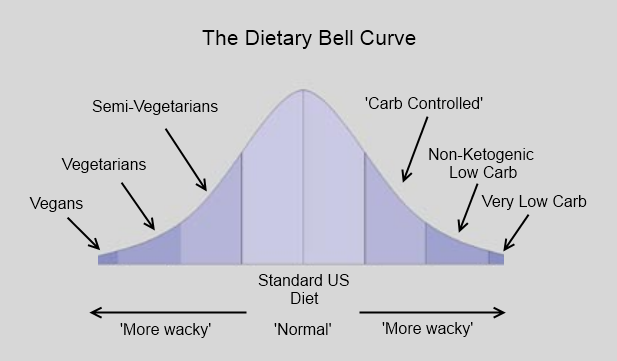 The other day, before the start of yet another meeting at work, someone brought up Dr. Oz. One person said: “I always used to think that drinking skim milk was good for you, but Dr. Oz said you should drink 2%.” It was said as a revelation, a shock.

I couldn’t help myself: “You know, fat isn’t necessarily bad for you. In fact, fat can actually help you lose weight.”

I got either nervous giggles or blank stares. I fell for it again. I shouldn’t have bothered and just kept my mouth shut. I learned long ago that while my coworkers seem to like me, those that know something about my predilection toward low carb tend to think I’m something of a loony.

I once had a very intelligent and medically-trained co-worker who knew me well professionally explain me to a new hire as we discussed diets: “You have to understand he has some peculiar notions about nutrition.”

The other day, I shoveled snow for about an hour. Not one for exercise (at least not yet – it’s a resolution for 2012), the exertion tuckered me out.  I collapsed on the bed to recuperate.

My wife, who by the way did not help with the snow and was instead laying  in bed, said: “Your way of life is poisoning you.”

“The way you eat. Look at you – you’re exhausted!”

I said back: “So you’re saying that if I hadn’t gone on a low carb diet eight years ago and lost 60 pounds, and instead ate pie all those years that I would have shoveled the snow in front of our house and still had enough leftover energy to shovel out a neighbor’s house?”

“Yes.” She said, only half-facetiously.

I have been putting up with this for eight years. From everyone. My doctor, my co-workers, my friends, my older kid (indoctrinated by school as to what ‘healthy eating’ is) – even my wife, who saw me go from puffy, bloated and lethargic to slimmer and more energetic.

Even if they like and respect me, they seem to make a sort of  ‘carve out’ in their heads to accommodate me, as if I was this really nice guy they know who just happened to think he had been abducted by aliens.

I have found that if I discuss low carb with some people, at times it literally makes them uncomfortable. So I’ve stopped, for the most part – and keep my thoughts to myself, to anyone interested (less than I could count on 1 hand in the past 8 years), and this blog.

Now, although this galls me to no end, I have made an uneasy peace with this.  I was already a non-conformist by nature before I went low carb, so people had already categorized me as ‘off the wide part of the bell curve’ already, so my  low carb lifestyle was only a change in degree rather than a change in kind.

I just became a little more wacky to them than before. I didn’t go from normal to wacky.

But what about people who identify with ‘normal’? I’m a pretty live-and-let-live kinda guy, and I don’t expect people to conform to my way of thinking or seeing the world. There are many people, however, that do want their friends and peers to think along the same lines as they do. They like the self-validation of being surrounded by like-minded people.

I suspect that these people have a terrible time at low carb dieting, especially an Atkins-style VLCD (Very Low Carbohydrate Diet) and ketogenic diets. If they were to go on a conventional diet, they have peers who are most likely doing the same thing. They watch their fat intake together and have lively discussions was to the relative merits of the different varieties of Snackwells cookies and Lean Cuisines.

However, if one of this pair were to go on a low carb diet, the camaraderie would disappear in a flash – they would have no common ground, no self-validation that what they are doing is the right thing – either of them – and if the low carb dieter were to assert that those Lean Cuisine frozen dinners were actually doing the other harm, they would probably cross a line in their relationship that could not be fixed until one of them came into alignment with the other.

Sadly, despite the fact that in the decade or so since the Atkins Carb Craze more and more research showing that low carb does indeed have benefits, in general, people still haven’t got the message.

Do you know how damned hard it is to find a yogurt that isn’t low-fat or no fat? It truly drives me batty.

So while there have been some gains in the past decade – certainly the demonization of trans fats – for good reason – has taken hold with the general public and the food companies have responded by getting it out of a lot of products, there are still 100 products proudly labeled ‘low-fat’ compared to 1 product labeled ‘low-carb’.

So people who are comfortable in the wide part of the bell curve are going to have to deal with the social pressure of being an outsider – along with all the standard difficulties that come with a low carb diet – like finding products.

Even Gary Taubes mentioned this outsider feeling in an article he wrote for Prevention a few years ago:

Perhaps the worst aspect of following a diet that most of your peers consider “a fad” is that you may often feel a compulsion to prove that you’re justified in doing so. This requires not just slimming down but actually living longer and remaining healthier than any of your friends. Because bad luck can be as much a factor here as genes and diet, you’re now in a delicate position, one that will last a lifetime (you hope). On the one hand, the temptation to treat your friends’ medical misfortunes as minor or even major victories is compelling, but you’ll have to keep this secret deeply hidden if you want to continue to enjoy their company. Then, of course, should anything unfortunate happen to you–“even moles in [your] front lawn,” as the New York physician Blake Donaldson, an early proponent of carbohydrate-restricted diets, noted in his 1961 memoirs–everyone will blame it on your diet.

Gary Taubes! The man has made this a career as well as his life’s work for over a decade and spent a good portion of that time doing serious research to justify his conclusions – and he still feels an outcast of sorts. Read the article in its entirety – it’s well worth it.

So…what’s the takeaway from all this?

I suppose if my hypothesis is correct that we can predict who has a better chance of succeeding on low carb and who has a better chance of failing on low carb by administering a psychological examination that tests for conformity. Doing a little research on tests of conformity brought me to The Asch Conformity Experiments.  Here’s a rendering of the test.

They were in a room with other people – all in on it with the researchers. When the group majority chose the wrong line, the actual research subject did so as well the majority of the time, meaning that a majority of people will go along with the group even if they are fully aware the group is wrong.

Do they do it to avoid conflict or because they want to conform? It doesn’t matter from our perspective – the Low Carb version of the Asch Conformity Experiment will probably see a lot of people bail not because low carb doesn’t work, but because they cannot cope with the social pressures from feeling the outcast.

Another takeaway is that we should be more generous to our brethren at the opposite end of the bell curve above – the vegans and vegetarians. Their way of life might be 180 degrees opposite of ours, but they go through many of the same issues we do in society, worrying about what is being served at some event so that they don’t go hungry for 6 hours, driving to 4 or 5 stores to find the ingredients they want – and then paying an arm and a leg for them, and having to endlessly endlessly explain their choices and their lifestyle to people who think a prefab microwaved TV dinner in plastic leaching chemicals into the food is ‘normal’.

9 thoughts on “Do Low Carb Diets Fail Partly Because of Social Pressure?”