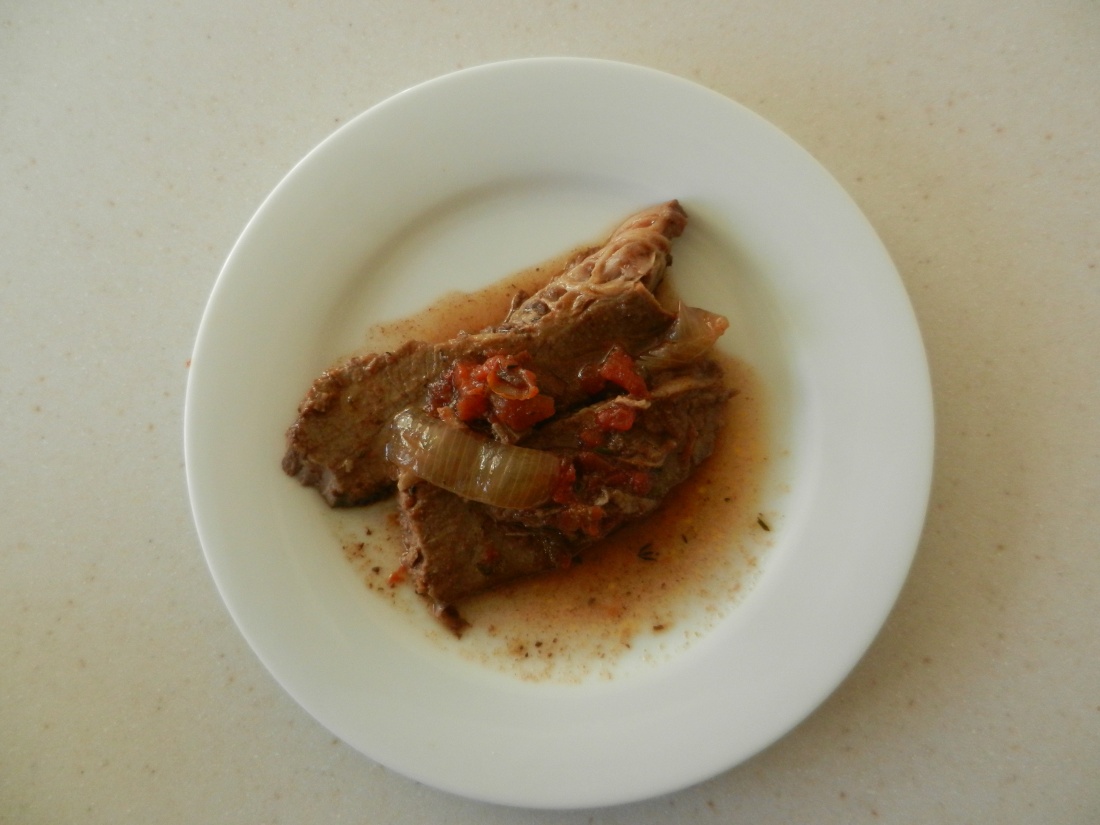 The kid and I had planned to cook a recipe for brisket from one of the cookbooks put out by America’s Test Kitchen, a concern that does what I do, but only on a large-scale – buys lots of food and ruins a lot of it – in order to come up with the perfect recipe. We’ve tried a couple of their recipes in the past, and, by golly, they did come out good.

The problem was that the particular recipe did seem rather involved and we just didn’t find the time to pull it off last weekend. This past weekend, I decided to do something with this beautiful and expensive piece of meat, but I wasn’t going to follow their detailed recipe…I decided I’ll just give it a whirl.

My large oval crock pot seemed like an ideal cooking tool for this piece of meat. Brisket is a tough cut of meat that can be made tender through a long cooking process, then cutting the meat across the grain to eliminate any long strings. The potential for failure is large, though – if it isn’t cooked right, the meat will shred, giving you long stringy shreds that ruin it.

So, combining a few recipes I found, I came up with this recipe as well as this method. Note that while this recipe takes time, it does not take a lot of labor, so with a little planning and patience, you’ll end up with a pretty flavorful  pot full of brisket.

Push the meat down into the liquid so the liquid covers the meat, more or less. I had a few spots where it stuck up and I drove myself crazy trying to get it all submerged, then said: to Hell with it – the long cooking time is a great forgiver of imprecision.

Go away. Forget about the thing. Go shopping, bring the kids to whatever playdate/birthday party/art class they have. Ponder philosophically how the kids have more of a life than you do. Do laundry, go out and get coffee. Read.

At some point in the day, you’ll find yourself back in the kitchen and will be dimly aware that you were cooking something hours ago. Oh yeah – that brisket.

Grab some aluminum foil – I used 2 layers for the bottom, and take the brisket out and place it on the wrap. Place another piece on top, and wrap it up. Put it on a plate to cool.

Go away again. Putz around the house, trying to look busy for the wife so she doesn’t notice you’re trying to relax and assigns you some long-forgotten task to screw up your afternoon with.

Next time you wander into the kitchen, put the now-cooled meat in the fridge.

Go out to dinner. Make dinner, or don’t eat dinner. This brisket is not for this evening’s meal, silly – it’s for tomorrow.

At this point you might be wondering: what’s the point. Fair enough. A year ago, I would have said the same thing. This year, however, I am trying to bring more technique to cooking, and have more respect for the food I’m preparing.

Aside from sounding high-falutin’ and snooty, what does that mean? Well, for complicated reasons having to do with the effect of long cooking on the meat, if you were to cut this pretty expensive piece of meat when you took it out of the crock pot, it would shred, and all those long fibers would guarantee that if your dental work was not up to snuff, you’d spend a half-hour trying to dislodge these fibers from between your teeth. That was not  what I was going for.

What you are supposed to do is allow the meat to rest – something about this prevents it from being dry, or allows it to absorb moisture – or something. Look it up. So ‘respect for the food’ simply means having just a little understanding of what the Hell you’re doing with the ingredients you have.

So you’re going to refrigerate it overnight.

In the morning, take your brisket out of the fridge, and carefully cut it across the grain.

You’ll notice some shreds at the bottom right in the picture. I avoided the entire piece of meat being like that by letting it rest overnight.

We’re not done yet.

Take the meat and put it back in the crock pot, which you let sit out overnight. Cook on low for another 2 hours to allow the juices in the crock pot ingredients to slowly infuse into the sliced meat. 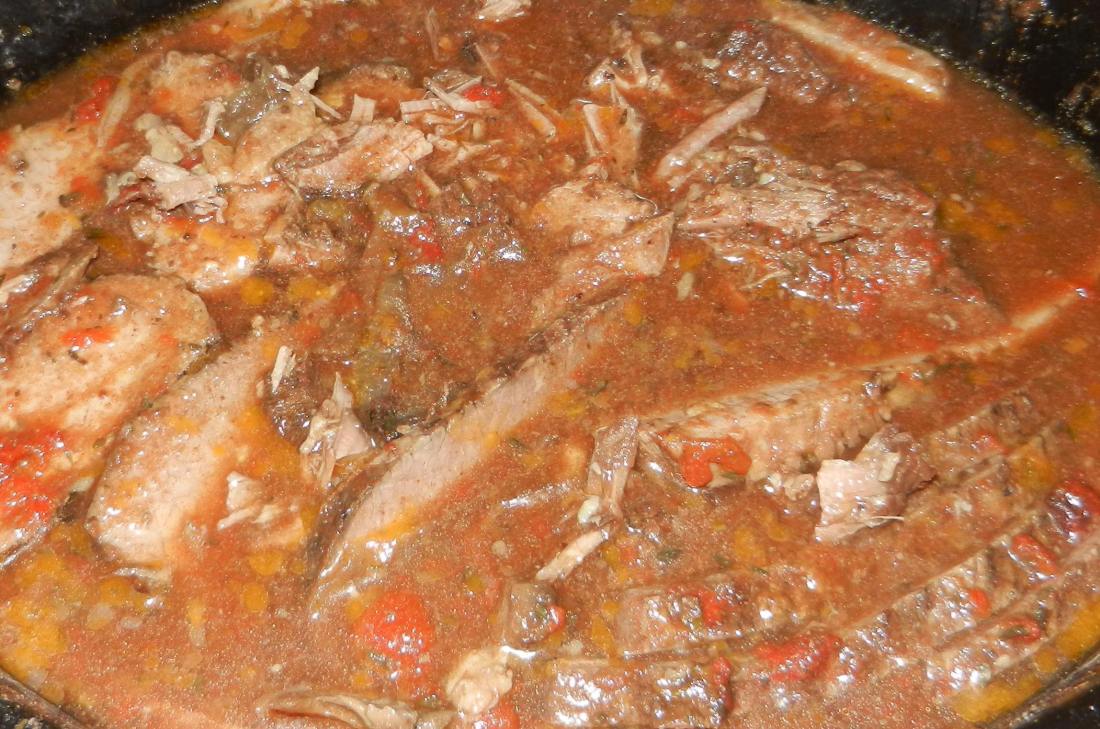 The kid made an audible and seemingly uncontrollable mmmmmm sound when she tried it – and the wife actually said to me the other night: you’ve gotten to be a pretty good cook nowadays. I thanked her for the compliment and she said: “I didn’t mean it to be a compliment.”

She doesn’t want me to get a ‘big head’, nor take on the maintenance of a ‘fragile male ego’. Bless her little heart – that’s my gal.

The family made short work of this, eating it with a side of mashed potatoes.

For us low carbers, it most certainly is something you can eat in the first phase of Atkins induction without fear of mucking things up – without the mashed potatoes, of course.

One thought on “Low Carb Crock Pot Brisket (With Pictures)”