Being a bit of a numbers nerd (ya think?!?), I find the emails sent by Fitbit kinda cool. Thought you might like a look. 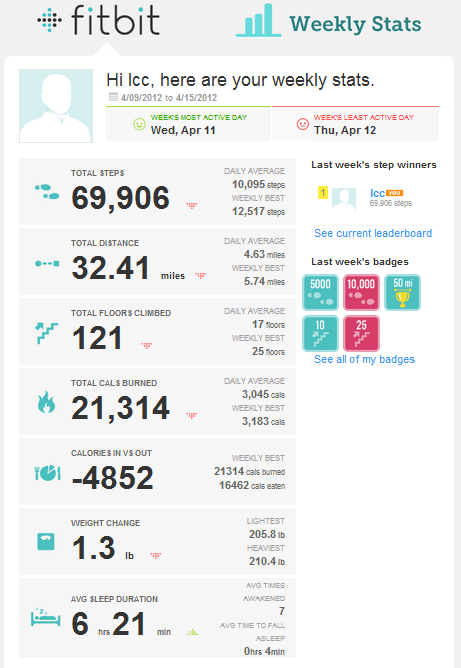 I am actually impressed with its accuracy. I’ve counted my steps a few times and compared it to the device and it is very, very close. It also seems to count going up stairs, but NOT going up escalators – clever. The weight numbers here might be a bit misleading because I haven’t been entering them in here with any regularity. I also question the accuracy of the sleep stats, as it’s easy to mess up – you’re supposed to essentially tell the thing you are falling asleep, but, like most people, this sometimes sneaks up on you if you’re reading in bed. I also have forgotten to put it on completely.

Anywho, these nits aside, I do like this gadget. I can carp a bit about the website and the app, but that can wait…

From the Palm Beach Daily News:

Johns Hopkins researchers have made the proponents of the always controversial Atkins diet very happy.

And in case this point was lost to those critics of Atkins, a press release from Johns Hopkins said, “These results show that weight loss, along with exercise, is important for improving vascular health, and suggest that following a low-carb diet rather than the conventionally recommended low-fat diet for weight loss is not a concern in terms of vascular health.”

If I were a shareholder in Atkins Nutritionals, which I’m not, I might be tempted to say, “so there” to all those naysayers.

But I’ll let Atkins staff do that.

“The findings from the Johns Hopkins study demonstrate what we already know to be true: Atkins has many scientifically validated health benefits, including improvements in cardiovascular health markers,” said Colette Heimowitz, vice president of nutrition and education for Atkins Nutritionals Inc., in a press release Atkins quickly put out. END_OF_DOCUMENT_TOKEN_TO_BE_REPLACED

As I am  a person with a restless mind, you might have noticed in my postings that my interests span a large number of topics.

If you have any interest in business and productivity, I’ve written an article for Lifehack.org titled ‘Business Lessons from an Unlikely Source: Children’s Books‘. Check it out if you’re interested in these sorts of things.

I’ve mentioned in my posts over the past few weeks that I’ve been walking a whole lot more. I also do a lot of thinking as I do this. Unconscious thinking. Thinking where a complex thought just seems as if it was handed to me, and I am just here to take dictation.

These thoughts are not necessarily good ideas (note my ideas on nicotine as a weight loss device), and I don’t treat them as such by default. I usually need to test them out – kick the tires so-to-speak. Creative, fully formed ideas are not always good ones, and I try not to fall in love with my ideas because they’re mine, although it’s always a hazard.

As I was walking the other day, one of these fully formed ideas was handed to me. I went in and transcribed it. It was the following – written in about the time it take me to type.

You are a Product

You are a product, as mass-produced as the cattle that become your fast-food burgers. From before your birth, you, like that cattle, exist as a statistic, one that is expected to produce and consume from cradle to grave, and all that producing and consuming is intended to prolong your life to the full extent of others’ profitability and even in your death it is expected that they will turn a quick buck. END_OF_DOCUMENT_TOKEN_TO_BE_REPLACED

I have lifted this verbatum from Businessinsider.com:

A study led by Timothy Judge at the University of Florida and published by the American Psychological Association studied the salaries of nearly 25,000 U.S. men and women. He found that women who were 25 lbs heavier than average make much less a year, while women who were lighter made more.

The pay discrepancy is telling because it reveals employers’ inaccurate assumptions about overweight workers, especially women. According to the study:

“Even though these stereotypes are inaccurate it appears that in the United States, obese employees are viewed by their employers as lazy and lacking in self-discipline…overweight women are consistently judged more harshly in the workplace than overweight men,”

The rewards for underweight women are staggering, according to the study:

For men, being heavier can actually pay. Scrawny guys made about $8,000 less than average, while peak earners weighed 207 pounds.

While I have been thinking that health should always come before the number on a scale, one conclusion that can be drawn from the above is that: in business, being thin pays. It’s economics. Another reason it’s called ‘the dismal science’.

There is something fundamentally wrong with our culture of thinness. There’s a big difference between someone wanting to fit into a dress, and someone facing actual discrimination their entire lifetime. Fat people – and especially fat women as evidenced by this –  are about the only people left that can be held up to ridicule and discriminated against in America – and I guess Americans need to look down on some group in order to feel better about their own inadequacies.