My wife had bought an ice cream maker – just what a low carb guy wants in the house – right? Anyway, I got to wondering if I couldn’t make some use of it. Perhaps bored the other night, I said to myself: I wonder if that ice cream maker can turn those Atkins shakes into some sort of frozen treat?

END_OF_DOCUMENT_TOKEN_TO_BE_REPLACED 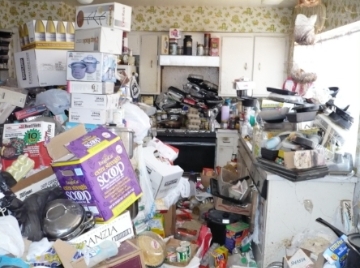 [Did you ever get a rush of motivation out of nowhere to, say, clean every drawer in the house? Every one?

Full of energy, you go from room to room, drawer to drawer, pulling out the various effluvia you’ve collected over the years and NOW you’re going to clean house.

Once you’ve done that, and begin to try to make sense of the half-pencils with the rubber bands around them over there, and the pile of baseball cards from when you were a kid over there, and sll those extra packets of cut flower food you unnecessarily grabbed over there…your motivation suddenly slows…

…What is all this junk?!? Why do I have this stuff again? You begin to question your sanity, wonder if you shouldn’t call a reality show to film this mess and at least make a buck off of this on ‘Hoarders’.

And then you find that thing that you found so long ago that you forgot that you had it. It’s really why you decided to clean out every drawer in the house in the first place – you just didn’t know it.

Four years later, this post from 2008, was exactly what I was looking for. It’s what I needed to continue New Happy Shiny Weight Loss Success.]

The ironic part of any diet is that so much of the focus is on food. For us low carbers, as well as for anyone following any sort of diet regimen, there is an almost all-consuming immersion in selecting, weighing, calculating, supplementing, hydrating, exercising, logging, and analyzing of just about every input and output our bodies have.

Many of us got fat in the first place not just because of unfortunate food choices, or because of an inherent tendency toward overweight, but also because of an obsession with food.

A diet replaces one obsession – overeating – with another obsession – regimented eating – which is a good thing in a way.

I’ve made the observation that it’s not easy to give up something like an obsession toward food. There’s too many psychological aspects to this. It plays to your strengths to feed your desire for a food obsession by channeling the energy into a diet regimen that allows you to obsess on that, so you trade a less healthy obsession about food for a more healthy one.

Let’s be clear: obsession in and of itself is not a bad thing. When I get on an airplane with my family, or ride in an elevator, I sure hope that the person who designed them was obsessed with making them safe.

I believe that this is a valid, and healthy way to lose weight. There’s a moral overtone to the word ‘obsession’ – one that connotes some sort of weakness or illness. That isn’t always the case. Obsession is just a stronger than average focus and concentration on a particular subject. If the result of this obsession makes you happier and healthier, then there is nothing wrong with it.

But as of late, I’ve been wondering if there is another way to think about weight loss.

As part of this, I first started thinking about the notion of hunger, and I believe that, at least in my case, there are 3 different types. They are:

Our cellular hunger should always be respected, the carb-driven hunger and the psychological hunger can safely be ignored.

Low carb folks can beat number 2 in the above list by avoiding carbs. This is, in my estimation, one of the big benefits to low carb lifestyles.

Part of the problem with psychological hunger is identifying it as such. How do we tell? And how do we deny ourselves?

Great – you’ve intellectualized the problem – but you’re still hungry. What do you do except deny yourself food when you want it? And folks, there is so much psychological and sociological BS surrounding this denial that you can drown in it.

Hunger in and of itself is a form of discomfort in the body. We all live in a world filled with discomforts – my chair hurts my butt, the lighting in the room is poor, my knees hurt, etc., etc., etc.

The difference in hunger as a discomfort is that, perhaps more than other discomforts, the hunger can bring with it fear. Some people are scared of being hungry. They can’t allow it to happen. This conditioning probably goes back to the caveman, and gave him that extra something needed to take on that angry mastodon that didn’t feel like being a meal for a bunch of hairy ape-like human precursors.

Some of us – probably the thinner folks – don’t have this fear. These are the ‘eat to live crowd’. They get hungry, but they don’t have the same fear attached to the discomfort.

Do you think ‘fear’ is too strong a word? Maybe, but ask yourself this: have you ever stocked up on a food because you were afraid to run out? That’s the fear I’m talking about.

So, in this day and age, with our refrigerators stuffed with food, and the grocery store open 24 hours a day for some of us, why would we somehow have a fear response that would be more appropriate to a person cast adrift on a life raft with a few cans of beans?

I’ve been questioning this response as of late and it seems that one way to explore this is to treat food as a utility. Imagine food as utilitarian as electricity. You’d never buy gourmet electricity – it’s the energy for other processes and just needs to meet a few criteria of voltage, wattage, and amperage to power your electric gizmos.

What if, as an experiment, the effort was made to think about food in the same fashion?

What if we say to ourselves that food is energy for other processes, not an end in itself. It has to meet minimum criteria for nutrients and calories to ensure health.

Nothing more than that.

Food ceases to become all the things that have surrounded it for a few millennium: social ritual, symbol of abundance, sensual pleasure, all disappear, and food becomes once again what it was to Man before the invention of cooking – and to almost all animals today – just an energy source.

If you follow food as a utility to it’s logical end, your life would be much different. Shopping would be damn simple – a few primary foods that you buy over and over. Your condiment shelf would shrink to a few bottles. you’d throw out less food, try fewer recipes, spend less time in the kitchen, eat more leftovers, probably, as freshness of a meal is an aesthetic aspect of food – only after the first few days does the lessening of nutrient quality and the potential for contamination make the food inedible.

You’re probably thinking I’m nuts about now, but this thought-experiment shows very clearly just how much about food has little to do with sustaining our bodies.

All of these thoughts came to mind as I thought about the period of time that I lost the final 15-20 lbs. I had decided to lose when I first went on Atkins. I had stalled at about 200 and stayed there for a year.

Then my family and I started the process of moving to a new area.

I recall the time as being one where I was very busy. There was no time for much more than work, sleep, and preparing for the move. The time for purchasing, preparation, and eating of food had to be compressed as much as possible.

For a few months I had to ‘eat to live’ – and the weight that refused to budge for a year came off seemingly by itself in about 3 months.

Well, that weight came back soon after the hustle and bustle of the move died down and I had some extra time. I then bounced back to that 200 lb. setpoint and hover around that today.

So what strategies might come from reflecting on that ‘live to eat’ experience that I can put into place now?

Some of you out there reading this might conclude that this would deprive you of food, of choices, and limit you to a restricted regimen. It’s the whiny inner child again saying this. If you base your food list on a limited variety of high-quality food, your food choices will still be far greater and more varied than mankind has had the opportunity to enjoy for almost all of history, and your food obsession is battling reason.

Your inner child is right, in a way: you are depriving yourself of food. But what the inner child, and their short-term interests don’t see, is that an obsession with eating what you want, when you want it deprives you of your goals.