To me, one of the most important habits one needs in order to transform your diet into a healthier one is to read the labels. This short video provides just one example of how to do this.

[Quick update 09/22/12: still in induction after 10 days. Still writing. Still hoping to turn the experience into a nifty book on what it really feels like to do Atkins Induction, with oodles of tricks and ideas and some sciency stuff thrown in. Still giving it away for a limited time on Kindle (which you can read on your computer – if you can read this, you can read a Kindle book). Still hoping I can get all this done before the end of the year. Still hoping I don’t abandon it – or reread it after I’m finished only to find I have written 80+ pages of stuff that ain’t just good enough.]

Lee Kirsten is another blogger who writes about low carb. I read her blog, she reads mine, and we trade comments when the mood strikes us. One of her posts really struck a chord with me: the notion of her having a big high-carb cheat for her birthday.

You can read the post here, but her question at the end asked if it was a good idea. I commented: go for it. She replied:

I see the logic in your position, but I also see that by eating those foods again, for a day, and especially if I don’t see a weight gain 2 days later, it will say to my mind, ‘See, you can eat carbs- nothing bad happened’, and thus the slow process of rationalization, bit by bit, could ensue. I could gain five pounds, and say, “five pounds is not a big deal. I still look and feel good’. Then eight pounds. “Well, I just need to go back to counting my carbs more strictly- it will come right off after Thanksgiving/Christmas/New Year’s/Valentine’s Day. You see the slippery slope theory is one I have lived many times. How do you think I ever got off Atkins in the first place? The complacent stage sets in. A lot of people say that while low-carb really works, it is the hardest plan to live by long term .I would like to prove that theory wrong. What scares me is that I still consider being able to eat those types of foods at all as some kind of ‘reward’, and I think that is part of the problem. Why couldn’t my reward for a birthday be based on something completely NOT to do with food? I need to think about this. Why not get myself a massage, for example?

She has a really, really, REALLY important point.

This is the ‘moment of truth’ in nearly every dieter’s existence. You’ve come this far. Do you play it safe or pull the tiger by the tail? Do you pick curtain number 1 or curtain number 2? Do you feel lucky, punk?

After 9 years on low carb, here was my reply: END_OF_DOCUMENT_TOKEN_TO_BE_REPLACED

UPDATE: Stupid here forgot to mention that the thing had eggs in it – which just happens to be the main ingredient. Duh. I think I messed up on the nutrition info as well.

I was riffing on the ‘quiche’ recipes from the previous weeks and thought to try a variation. I found a ‘frittata’ recipe that vaguely resembles this – with low cal this and fat-free that – so of course I had to change it up and do a remix. Using ingredients around the house as well as a special purchase of nitrate-free deli ham sliced as thick as the deli man said he could slice it, I whipped up the following

I had greased the pan with an olive oil spray and the little ‘frittatas’ (the recipe I got it from called it that – I have no idea what a ‘frittata’ is) came out nicely with a spatula run around the outer edge.

I think this might have been one of the best concoctions I have yet come up with. Everyone in the family enjoyed these, my daughter stating that they tasted like the souffles from Panera Bread.

There was a perfect balance between the ham and the softened but still firm onions, each adding a layer of texture aside from the cheesiness of the rest, and the Greek yogurt added body and volume. The taste was fabulous if you like ham and cheese, they all came out of the cupcake tin with little effort, held together in a large container, travel well, and warm up great. These have been my lunch and dinner for a good part of the week.

Great for induction. I’m eating 1 or 2 a day, am in induction now and my ketone level is moderate on the test strips – and I am losing weight eating them. That’s important. Induction-friendly stuff can still sometimes cause a stall in some people.

UPDATE: Lazy me sat down and made a tally – thought you might like to see – though looking at it 5 days later I think I screwed this up as well:

PS – I looked it up. Apparently a ‘frittata’ is not baked – that’s a quiche. Call it whatever you like.

If you wonder why I post virtually the same recipe twice, it’s because I don’t know what I’m doing.

I thought the last salmon Quiche was pretty good, but I wanted to adjust it a bit – kick the seasoning up a bit, add more veggies, etc. I want it perfect – hard for someone who really can’t cook.

As Saturday was rainy and I was up early with the kitchen to myself, I thought I’d have some fun experimenting. There’s also the thrill of wasting perfectly good food.

I don’t gamble – I guess this is my substitute. 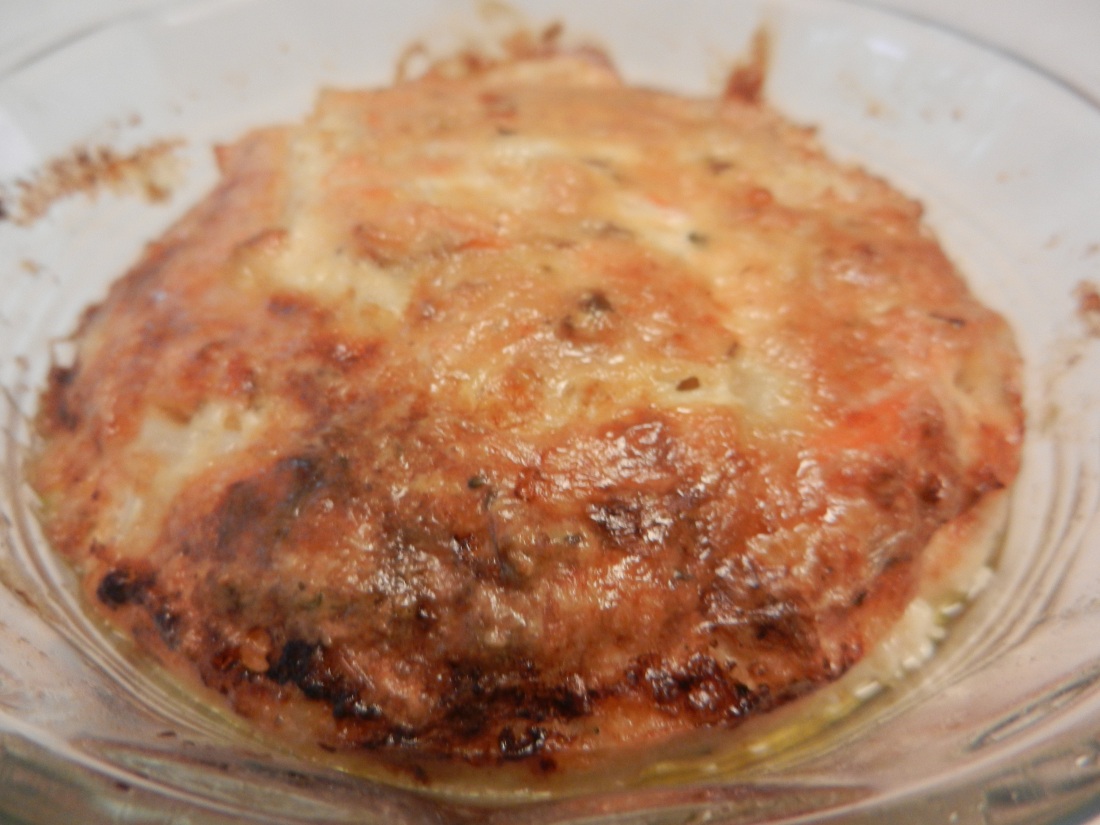 It’s been a long time! I haven’t been cooking much, and when I have, I’ve been going to old standards, like variations on my chili.

However, with my so-called ‘return to low carbing’ as well as a clean out of a cupboard, I decided to whip up something with a can of salmon I had lying about.

All of the above was mixed, then put into 3 small baking dishes, then dashed into a 350 degree oven for 25 minutes.

Verdict: not bad. the trio of little Quiche rose nicely and browned nicely. Creamy and not particularly fishy. Next time, I’d add more onion to add more texture, and perhaps a bit more Old Bay Seasoning to kick it up a notch.

While I did not bother to tally, I can guarantee that this is good for Induction and the carb count is negligible.