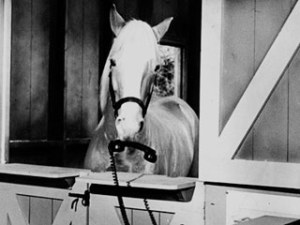 “People yakety-yak a streak
and waste their time of day
But Mr. Ed will never speak
Unless he has something to say”

The pleasure of a blog is that there needs to be no consistency, nor constancy, nor coherence. Yeah, some blog for reasons that make sense. Perhaps to get a book deal, or parlay their blog into something bigger – a new career, fame of a certain measure, or to become notable in their particular ‘tribe’ on the Internet – those obscure niche interests that bring together people with obscure interests of no interest to anyone they know.

Whatever the reason I do this is beyond me at present. And the reason for breaking my silence after 4 months now is also hidden from my consciousness.

Perhaps I finally have something to say.

That’s another cool thing about a blog – at least this one. Not particularly interested in building traffic means I don’t have to ‘play to the crowd’ – I can piss everyone off and do so completely indifferent to whether this happens or not. It’s not my schtick to write inflammatory screeds. I just write. It comes out, I cringe as I hit the ‘publish’ button and see what happens.

For the past couple of months I have not been following a low carb diet at all. Sort of. And while I haven’t lost weight, I haven’t gained it either.

At the beginning of the year I was about 225 pounds. I did the low carb routine to varying degrees – including an extreme version used by cancer patients. Regardless of the effort expended, I bobbed like a cork around the 225 number.

Then I surrendered. I thought of it not as a conclusion or a defeat but rather a ‘vacation’ from the diligence, the weighing of myself, the tracking of my ketones, my foods, my blood glucose, my steps.

I found myself, without much thought put into it, starting an admittedly odd routine.

I used to drink a pot of coffee. Now I just had one large 24 ounce coffee with cream – which I didn’t bother to measure.

I bought a PUR water pitcher and would fill it at work, then drink the entire thing during the day.

At around noon or so I would have another 12 ounces of coffee with some coconut oil – not necessarily because of some magical nutritional power of coconut oil, but because it never went bad like cream would – and my coworkers would never ‘borrow’ any.

I would keep a half-dozen eggs in the fridge along with chicken broth. If I got hungry I’d break 2 eggs into my coffee cup, cover with chicken broth and nuke for three minutes. I would be sure to break the yolks as I one time I did this the yolk, still cooking after I started eating, exploded in my face, leaving bits of egg on my face and shirt (I was glad nobody noticed this though it would have made a great Youtube video).

An alternate to this was macadamia nuts. I’d have a handful instead of the egg and chicken broth.

While this was somewhat routine, it was not followed religiously. There was the occasional sandwich or pizza for lunch, or a stop at McDonald’s on the way home. Maybe once a week.

In the evenings our family started a new habit of cooking a ‘family meal’ together. Instead of everyone eating different things on different schedules we turned off all electronics and sat down to family meals of pasta and meatballs with Italian bread and butter, pork belly, mashed potatoes and corn, home-made pizza. Steak with rice and peas as a side. Plain fare slapped together by a busy family of foods we all liked. There was no ‘special meals’ for me, nor did I curb myself in any way: I ate what I wanted.

On the weekends it was usually ‘anything goes’ for me during the day. Recently we discovered a farm not too far from us that sold raw milk and yogurt. I would have these – and whatever else showed up.

I stopped obsessing with my diet, ate with my family, and enjoyed whatever was put in front of me.

With all the carbs and the devil-may-care approach, why haven’t I gained? Conversely, before this when I tried my damnedest to adhere to a low calorie, low carb diet, why didn’t I lose?

Right now I am thinking that *something* happened when I had my appendix taken out in October of last year. I gained 20 pounds in two months and that’s pretty much where I’ve stayed no matter what I do – including almost nothing.

I suppose it could be summarized as a ‘one meal a day’ approach with mostly 100% fat supplementing during the day.

I don’t feel particularly bad doing this. It’s easy, I don’t let myself go hungry, my lunch menu is fixed and simple, and I enjoy my evening meal with my family and don’t seem to pick much after dinner.

So right now I plan to continue to do what I’m doing and not thinking much about ‘diet’ and ‘weight loss’. When I feel like it, I suppose I’ll come up with some other hare-brained plan that will (somehow) include our family meal but perhaps throttle back on the carbs.